Ten days left to submit to the Philadelphia Improv Festival

The window is getting narrow for you to submit your group to be apart of the 7th Annual PHILADELPHIA IMPROV FESTIVAL, taking place October 3-9 at the Philadelphia Shakespeare Theatre. PHIF once again is teaming up with Philadelphia Comedy Collective partner Philly Sketchfest and local comedians to put on Comedy Month, running through October.

Submitted groups will be considered for performance slots Wed – Sun of that week. All submissions are processed via the online form. I recommend you review the submission guidelines so you can make sure you’ve got everything together. If you still have questions after reviewing the guidelines, they can be directed to submissions@phif.org

THE DEADLINE TO SUBMIT IS SUNDAY, JULY 17TH

Tonight marks the start of the first annual F. HAROLD FESTIVAL at the Walnut Street Theatre Studio 5. Created and produced by RICK HORNER, the event features six days of local comedy, including improv, sketch and standup. The idea behind the event is to create a showcase exposition where audiences can delight in a cross section of talent, discovering new up-and-comers as well as reconnecting with old favorites.

Hey there duo fans! The wait is just about over… DÜOFEST kicks off this week, and boy oh boy are there some exciting pairings on board. The producers have put together quite an assortment, including local talent like Grimmacchio, Jessica Tandy, Matt&, BWP, Kristen & Amie Show, Suggestical and others, along with visitors the likes of Rachel & Dave, The Cascade, Trotsky & Hutch, Red Letters, Hodapp & Rothwell, Banana Breakup and a very exciting Messing w/ a Friend featuring Susan Messing joined by Christina Gausus. There will also be a number of special pairings that are either new, rarely seen, or assembled just for Düofest… like Jadico Fowler and Michael Loves Greg.

Full festival passes are already sold out, and rumor has it that day passes are quite limited at this point. You can find out more details about ticket options at the Düofest website. Now, let’s get to the lineup!!!

All shows are at the Shubin Theater, 407 Bainbridge St. Information about individual groups, tickets, planned excursions, parties and workshops can be found at http://www.duofest.com

In the short time since its inception, the ladies of the AMIE & KRISTEN SHOW have garnered a nice little following and high praise for their organic, rooted-in-the-now playing style. After cutting their teeth playing around the East Coast, AMIE ROE and KRISTEN SCHIER are now westbound… for the SEATTLE FESTIVAL OF IMPROVISED THEATER (SFIT).

To offset some of the heavy cost burdens associated with doing a trans-continental journey for a comedy show, they are having a fundraiser show tonight at the ACTORS CENTER in Old City. They will be joined by improv friends MEDIC and IRON LUNG for a few hours of laughs, from which the proceeds will appreciatively help them “not be broke.” 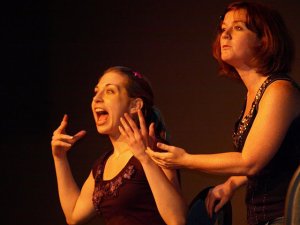 I had a chance to chat with the ladies about tonight’s fundraiser and their impending trip.

PHILLYIMPROV: With both A&KS and MattAnd performing at SFIT, this is the first time Philadelphia has been represented there. What are you looking forward to?

AMIE ROE: Wearing flannel shirts and listening to grunge! They still do that there, right?

KRISTEN SCHIER: We’re proud to be a selection… Mostly looking forward to going to the fest for the first time. I know only a few of the acts, and if they are any indication the festival will be a lot to watch and learn from.

PI: What about your show are you most excited to share with audiences?

KS: I am excited to share knowledge about the talented Philly scene…

AR: …bring a tiny piece of the amazing improv and comedy scene that’s developing here in Philadelphia to another city.  It’s an honor whenever you’re selected to appear in any festival, and a real privilege to be an ambassador for Philly comedy.

KS: And have a blast doing our girlish romp of a show!

KS: (Tonight) is about being thankful for anyone who is willing to come and see our show… Any money we raise will be received with much graditude.

AR: We’re going to look really hot.  I’ve been running a bunch and exfoliating… plus I got a hair cut two weeks ago, and I know my girl Kristen has been rocking the WiiFit.

KS: It’s about showing of some of Philly’s newest improv acts.

AR: We’ll be joined on stage by Medic, a collection of some of the most talented PHIT house team members, and Iron Lung, a brand new team that formed out of a PHIT level 201 class that I just taught.

KS: Iron Lung and Medic will be fantabulous!

Disturbing video of the day

Back in November, the FEEKO BROTHERS took the title of Dirtiest Sketch in Philadelphia during Comedy Month at the PHILLY SKETCHFEST. To be there was to experience an assault to the eyes and nose that is really quite incomparable.