ANIMOSITY PIERRE, the organizers of the PHILLY SKETCHFEST, host a sketch comedy competition tonight at Helium Comedy Club. Up and coming sketch groups each compete to earn a performance slot in PSF2010. On the bill for tonight:

Each group gets six minutes to wow the audience and the judges. The judges include Rob Baniewicz (of Meg & Rob), Alli Soowal (of Real Housewives & PHIF producer) and PSF producer Ben Maher.

Hosted by CAROLYN BUSA, proceeds from the evening will benefit the 2010 Philly Sketchfest, a member of the newly minted PHILADELPHIA COMEDY COLLECTIVE and part of COMEDY MONTH, taking place this November. Tickets are $12-$17 plus a two item minimum.

In this great video for Lost fans, Dave Terruso and Matt Lally of local sketch group ANIMOSITY PIERRE explore what world we may face in a life after the completion of Lost. It even features a fun cameo from the Preston & Steve Morning Show:

CityPaper’s Lauren Friedman recently chatted with DAVE TERRUSO, member of ANIMOSITY PIERRE and producer of PHILLY SKETCHFEST on sketch comedy in Philadelphia and the festival.

The fellas of ANIMOSITY PIERRE are back this week with a bigger and more ambitious PHILLY SKETCHFEST. Originally launched in June of 2008 by BEN MAHER, MATT LALLY and DAVE TERRUSO, the festival is back this week with two additional producers, JESSICA CIARAMELLA and CATHLEEN COLLINS and an outstanding lineup of local sketch comedians.

The three day event runs this Thursday through Saturday at Plays & Players, with shows at 8PM & 10PM. Each night is hosted by a local comic and promises to not disappoint. Here’s a quick rundown:

Additional details and tickets are available on their website

ANIMOSITY PIERRE is set to debut a new show tonight, and it’s got me excited about what they’ve got up their sleeves. Thinking back on all the shows I’ve seen them do, my favorite of their characters has probably been the rap duo Blangalangalang (aka Balal) and Footy Pajamas (aka DJ Footy PJ).

My first encounter with these comic OGs was back in January of last year at Die Actor Die when they debuted their very NSFW single, Lick That Asshole. ICYMI the first time, Comic vs Audience was kind enough to catch it on tape.

The nearly two hours of comic hijinks will be kicked off by Helium regular Andy Nolan.

Tickets are $12, along with a two-item minimum and are available in advance online or at the door. 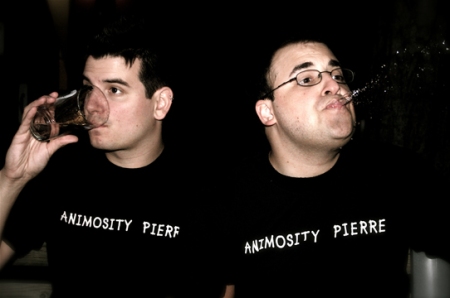