Using clips from the show on Saturday, 4/23 (a show inspired by a library and spiders), here’s a promo trailer for STAGE FRIGHT: AN IMPROVISED HOMAGE TO HITCHCOCK – giving you a taste of what the shows have been like. The show closes this Sunday, so you only have three chances to see a new Hitchcockian story improvised just for you.

Building on the success of last year’s Fringe show, HOW TO SOLVE A BEAR, The GROUNDSWELL PLAYERS – (aka LEO CALLAHAN) are mounting a new production this weekend in cooperation with the PHILADELPHIA JOKE INITIATIVE entitled LITTLE PLATES, BIG TAPAS. Billed as a ‘darkly comic offering’ – the show is a scripted play, workshopped from improvisation, and then subsequently fine-tuned under the direction of DAN PLEHAL.

Set in a pasta joint, newly handed down to a culinary trained son – the show explores the comedic clash between big city dreams and small town realities as he attempts to turn the little establishment into a high profile tapas eatery.

SCOTT SHEPPARD, JESSE PAULSEN, JACK MEANEY and ALISON KING brought their previous experiences from How To Solve a Bear into the production, this time joined by long time Leo Callahan collaborators NICHOLAS MIRRA and NICK KERR. Kerr’s character even sets the mood with some piano playing.

While improvisation is a tool utilized by many writers during the development process, for theatrical newcomers like Mirra, the experience of honing and performing that material is something very different indeed. “I came to (the show) with the perspective of an improviser and writer, not an actor… it’s been an exhilarating and challenging process.”

For Mirra, the work has evolved from something familiar yet fleeting, to a body of work with real sustainability. “We tend to appreciate and then forget, because it’s improv and inherently transient… trying to capture, define and repeat is not something I’m accustomed to worrying about.” And it’s in that repeated execution that the reward becomes evident. “Everything we do on stage is imbued with intention and forethought.”

And just what can we expect from this little labor of love? I think Mirra sums it up best… “(the show) is a small-town comedy located at the intersection of food, family, love, loss, ambition, and Himalayan fungi.” 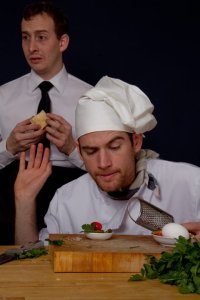 Here’s the comedy that’s happening around you this weekend: 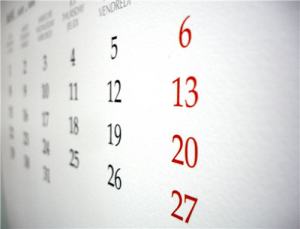 It’s a weekend packed full of shows, so let’s get to it… 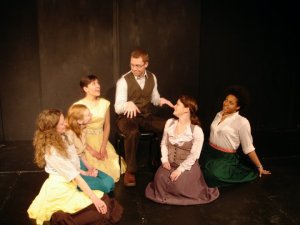 First up however, are the darlings of the golden age, Richard Rogers and Oscar Hammerstein – known for such Broadway classics as Oklahoma!, South Pacific, The King & I, Carousel and The Sound of Music.

Over the last few months, the cast (under the direction of Jason Stockdale) has been completely immersed in the world of the famed songwriting duo, studying everything from song structure to character archetypes to dance styles – making sure that what they belt out is not only on key, but also on point. Every night will be a different musical, yet the goal is to have each one ring true to the musical tropes that R&H became so famed for throughout the 40s and 50s.

The show opens tonight (May 13th) with a grand reception, and continues through May 29th.

Over the past few months, the PHILADELPHIA JOKE INITIATIVE has presented a number of single night showcases, including the Mike Connor Travelogues and a fundraiser featuring music from the Hopper Brothers. Beginning tonight, this small production company launches its largest endeavor to date, and plans to do so with a little Victorian class.

The show, featuring KELLY JENNINGS and KAREN GETZ in the eponymous roles of Cecily and Gwendolyn, is a fully improvised imagining of two slightly mad Victorian ladies who fancy themselves anthropologists. When all is said and done and chronometers have been synced, each evening explores the notion that these time traveling ladies find themselves 175 years through space and time via their hot air balloon in present day Philadelphia – where each night’s audience will serve as lab rats of sorts… from whom they’ll extract their conclusions about the “modern” society in which we live. 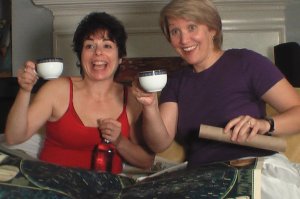 I was fortunate enough to attend a private performance this past weekend, and can honestly say that I’ve never been quite so excited to see how audiences will react to a show. Karen and Kelly (as pictured L to R above) have taken the idea of audience participation, and replaced it with complete audience immersion. The entire show is an evening that we’re all invited to take part in. Everything from the set to the seating, the costumes to the conversation, all welcome the audience member in, begging to be engaged, hoping to engross. Sitting there with only a handful of people, I’ve never felt so unconscious of my contribution. Getz and Jennings do a remarkable job of captivating with ease. Something that while I know from talking to them has taken years to develop, comes across as simple and organic.

As you can tell, I’m really excited about how it all drew me in and am excited to hear how audiences respond to this level of participatory immersion.

If you’re interested in reading  more about the show, more can be found in this recent writeup in the CityPaper. You can also get to know these ladies by watching their YouTube videos or by joining them on Facebook.

During its three week run (Thursdays through Sundays, excepting tonight’s opening) the show will play host to a myriad of comedy guests, including local talent the likes of Chip Chantry, Cubed, Rare Bird Show, BWP, Leo Callahan, the N Crowd, Real Housewives of Philadelphia and ComedySportz Improvised Shakespeare as well as Hello Laser from the Magnet Theater in NYC.