Who’s up for a Gross holiday?

We’re facing some record high temperatures this holiday weekend. Folks are out and about, enjoying block parties, barbeques and other celebrations. For those looking for a little break from the heat and want to end their long weekend with perhaps a bit of disturbed laughter, the PHILLY IMPROV THEATER aims to cure what ails you with it’s raucous and unruly GROSS SHOW.

Readers are likely already familiar with host ALEX GROSS and his unbelievably debasing assortment of talk show guests. In the last show alone we saw a bevy of sexed up Disney princesses, a trio of passionate rapists and a frightening collection of other misfit characters. Rumor has it tonight’s show will feature the always hilarious Roger C. Snair as well as the riotous Fastball Pitcher Bob Gutierrez, amongst other surprises. So head on out and leave at least a little uncomfortable.

Many of you might already be familiar with THE GROSS SHOW… one the newest and more lively additions to the PHILLY IMPROV THEATER‘s roster of recurring shows. For those still unacquainted, the live show takes aim at the most odd, extreme or unbelievable among our species with a Jerry Springer-esque slant. Host ALEX GROSS brings audiences into a world where taboo is typical and relationships have a bit of an edge to them. The show garnered so much attention in it’s first few runnings – the antics raised to such levels – that it had to be given a new night.  I think those that have seen it would agree that words somehow fail in adequately trying to explain this show to you. So instead, enjoy this little reel of moments past:

You can catch THE GROSS SHOW Tuesday, March 29th at 8:30PM. More info

Tonight: The Bully Pulpit at the Shubin

The PHILLY IMPROV THEATER keeps ’em coming tonight with THE BULLY PULPIT. The show features comedian LUKE GIORDANO hosting a panel of four different comedians each month in a round table of discussion, argument, and personal attacks. Moving from topic to topic, the show can center on pop culture, current events, or whatever the panelists have on their minds for a show full of fresh, off-the-cuff comedy in the heat of the moment.

PHIT Week continues tonight with two of my favorite shows in the city. A cool ten dollars will get you a whole night of comedy awesome…

8PM – WHY AM I NOT FAMOUS?!? WITH KENT HAINES
Philadelphia’s only live talk show explores the successes and failures of some of the city’s funniest comedians. This month Kent welcomes Steve Gerben and sketch group Secret Pants. 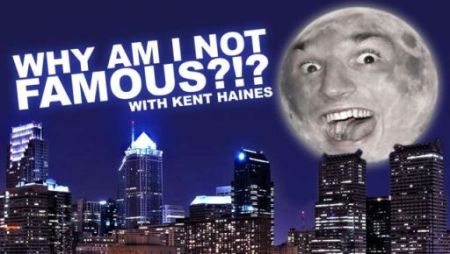 10PM – GUILTY PLEASURES WITH BRENDAN KENNEDY
The show that takes care to select only the worst of screenplays, shorts and various written fodder, and pairs them with only the best comedic talent. Brendan has his tongue planted so firmly in cheek with this show, it’ll make your cheeks hurt too.  This month’s parts will be played by Chris Cotton, Roger C Snair, Richie Redding and Sidney Gantt.

Listen Up: C vs A Radio Hour tonight!

DAVE WALK hosts the bi-weekly C VS A RADIO HOUR tonight at 7PM on Gtownradio.com

Tonight: Why Am I Not Famous?!

Shubin Week presented by the Philly Improv Theater continues tonight w/ KENT HAINES and his live talk show, WHY AM I NOT FAMOUS?! Kent’s guests this evening include Meg Favreau (of Meg & Rob, Everything Must Go) and Steve “The Iceman” Gerben (Philly’s Phunniest 2007).

It’s only Tuesday, and the Philly Improv Theater’s Shubin Week is already well underway. Things kicked off last night with the inauguration of the Comic Vs. Audience Comedy Show, just one of PHIT’s new shows debuting this month. Tomorrow night after Bedtime Stories we also see the induction of a new monthly serial, as local favorite Kent Haines invites guests on his new talk show to help him answer the ever-elusive question of Why Am I Not Famous?